Well I got back from Brighton at about 7.30 last night which meant the kids had already gone up to bed.
When we were finishing lunch at about 3 and I realised I wouldn't catch them before bed time I got a bit upset as I really was missing everybody by then, but I had such a lovely weekend it seemed a shame to try and rush everyone!

When I got home, the other half told me that Alice was in our bed that night as when she had been going to sleep she wouldn't settled and had said 'I miss mummy'(how cute, this was lovely to hear), so the other half had let her tuck into our bed and promised her shed get cuddles when I was back.

It was absolutely lovely to tuck up in bed with them both and have a big cuddle last night and just a shame Thomas was in his own room (but delightful that he was sound asleep!)

The other half had work and Alice had playschool this morning so it was just me and T but we had a great morning, and I made him up some rainbow spaghetti to play with!

All I did was to cook a packet of value spaghetti, pop a little bit of oil in it, and then ran it all under the cold tap for a minute to cool it off.
Then I separated it into a few old margarine tubs so I could colour it different colours. I had red, green and yellow food colouring, and so made red,green,yellow, orange (by mixing red and yellow) and pink (by only using a drop of red). 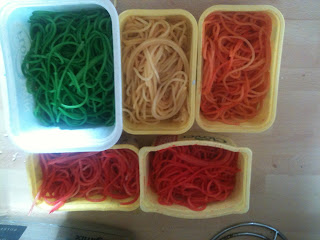 I bought the coffee table into the kitchen and popped the platicated table cloth over then got a big plastic bowl, some picnic bowls and Thomas so we could get stuck in.

I popped him in an old ikea bib as an apron and he had a great time mixing up the different colours, spooning it into the bowl, feeling the texture and yes eating a bit.
It doesn't matter if your kids do eat this because it really is just spaghetti and food colouring! 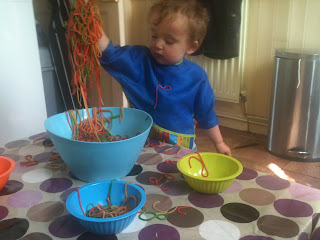 When Alice got home from playschool she had a ball playing with the spaghetti too and I defiantly think that was 40p well spend on a pack of Value Spaghetti. Really did provide hours of fun. 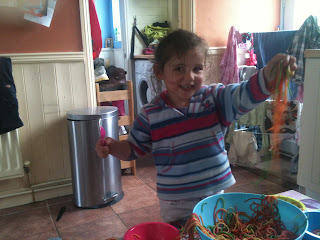 To add to the experience you could add food essences/flavourings or try putting some glitter in with it. (don't then let kids eat it).
If it had been a nicer day I would have let them take this outside to play with on the grass too!

I'm a 24 year old mum of two trying my best to 'not quite keep up with the Jones's ' while managing our very limited family budget.
I hope my blog might give you that sense of joy you get from finding that gem in the bargain bin.